Clients often ask us:  what is the one metric to best characterize the true state of user sentiment?

Of course, much of this search for “the one” is driven by a desire for brevity.  These days, it seems everyone wants information distilled down to a single perfect number or soundbite.  Regardless, the question remains valid.  A single metric is easy to grasp and communicate.

Well, it turns out we’re in luck — there are actually two great candidates!

So, let’s discuss each in turn, and then suggest a few of our own. 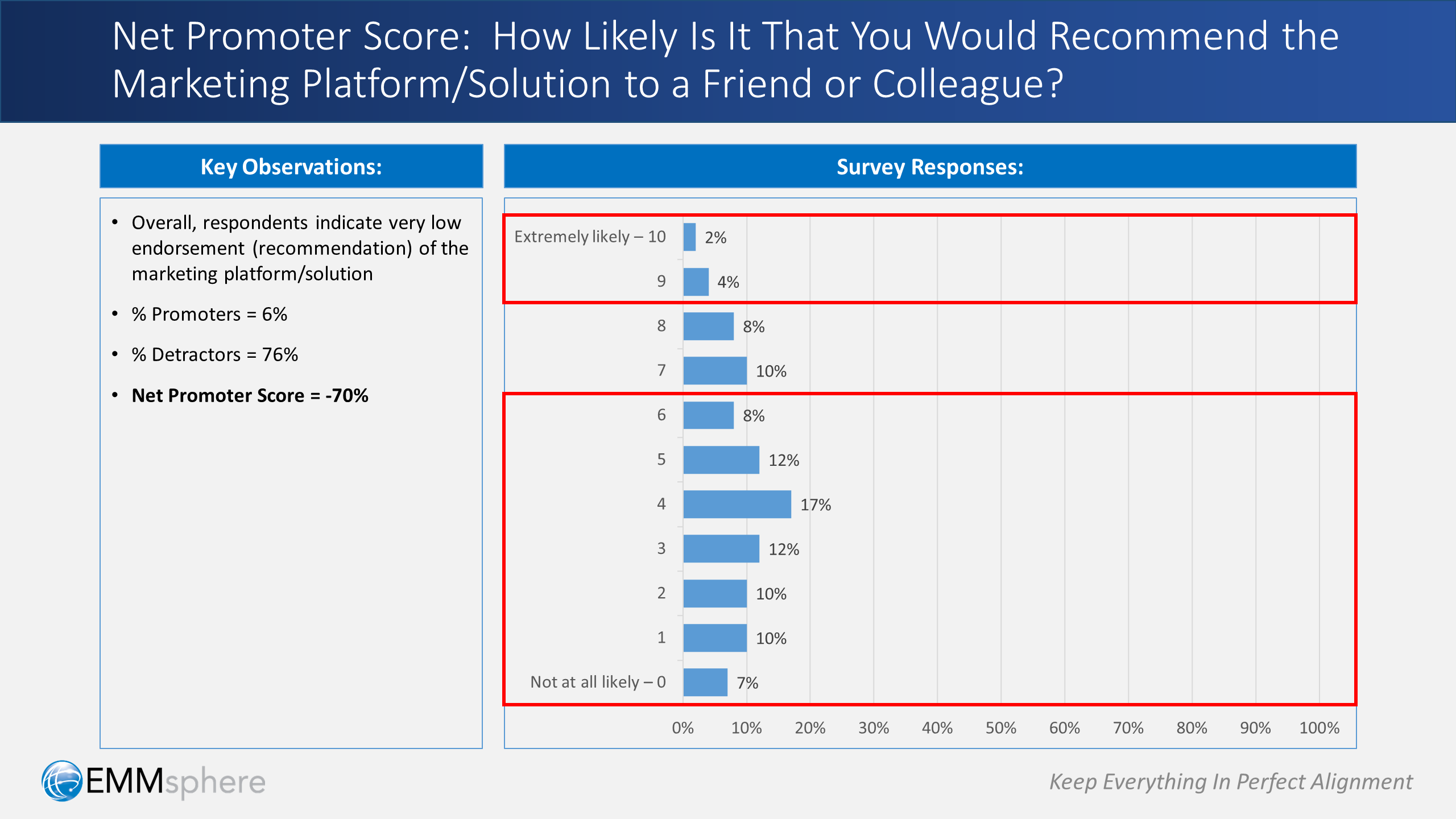 When organizations look for the proverbial “one and only” metric, NPS is almost invariably the go-to number.  It’s extremely well known, it’s even a registered trademark (originated by Bain & Company).  And being so well established, it’s typically executed consistently across organizations in order to maintain compliance with the trademark.

We present respondents with a single question:  “How likely are you to recommend company | brand | product | service to a friend or colleague?”

To illustrate the methodology, take a look at the example above.  In this case, we have a situation with an alarmingly low NPS number, calculated as follows:

Tight, tidy and to the point, right?  We certainly think so — we use NPS all the time.

But, we also think there are a few things to keep in mind: 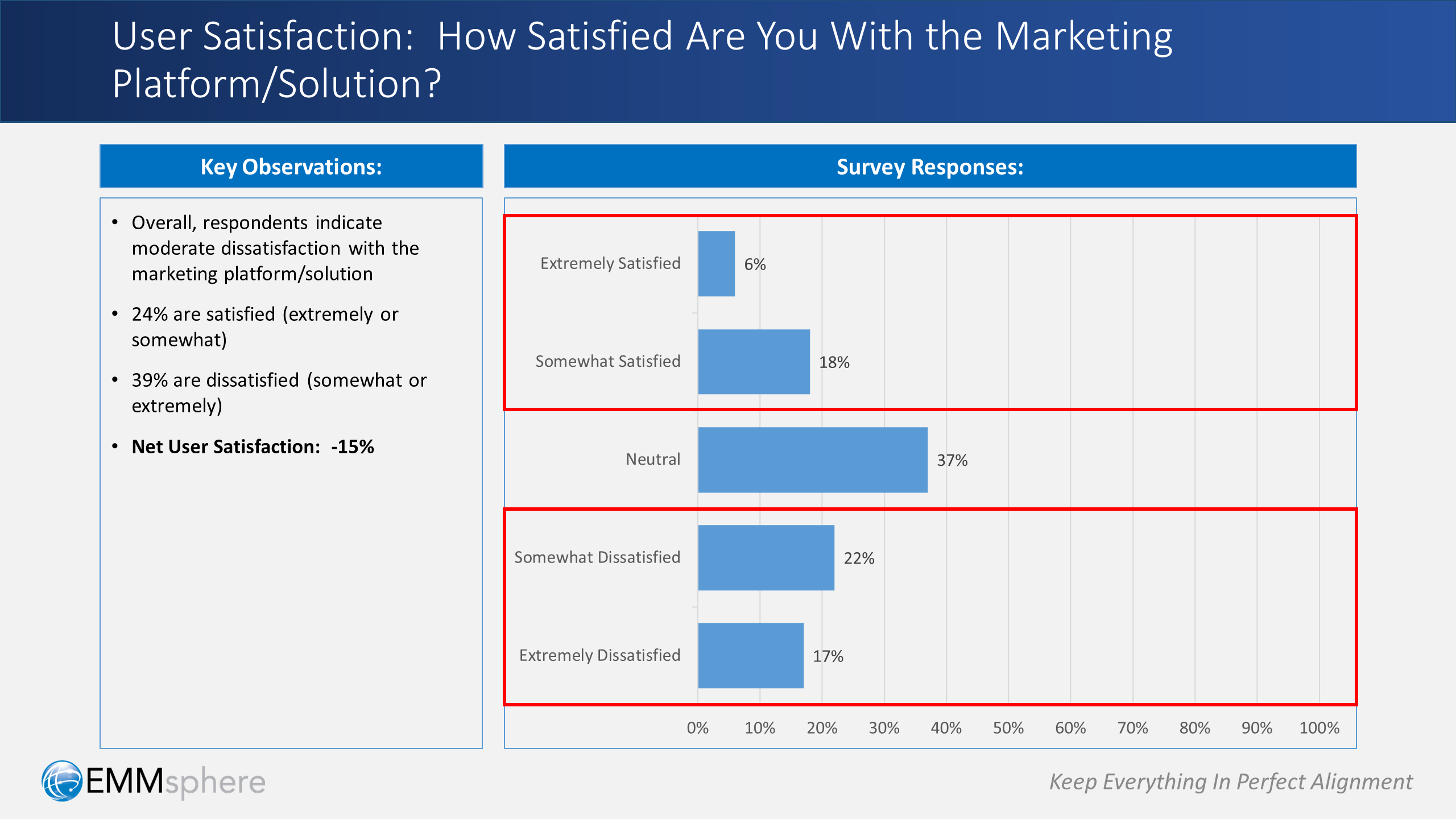 The other metric often used as the “one and only” is the standard user/customer satisfaction measurement.

There are many ways of phrasing the question, but it’s typically something along the lines of:  “How satisfied are you with the company | product | service | solution?”

To illustrate the this approach, consider example above.  In this case, we have a situation with a moderately low satisfaction number, calculated as follows:

Looks meaningful and familiar, right?  We definitely think so — and so does nearly everyone else!

User/customer satisfaction measurements are foundational metrics used by virtually all organizations that have an interest in understanding sentiment with respect to a product, service or solution.

In our case, we always use it to measure satisfaction with respect to an organization’s marketing technology platform and/or configured solution.

A couple of things to keep in mind, however: 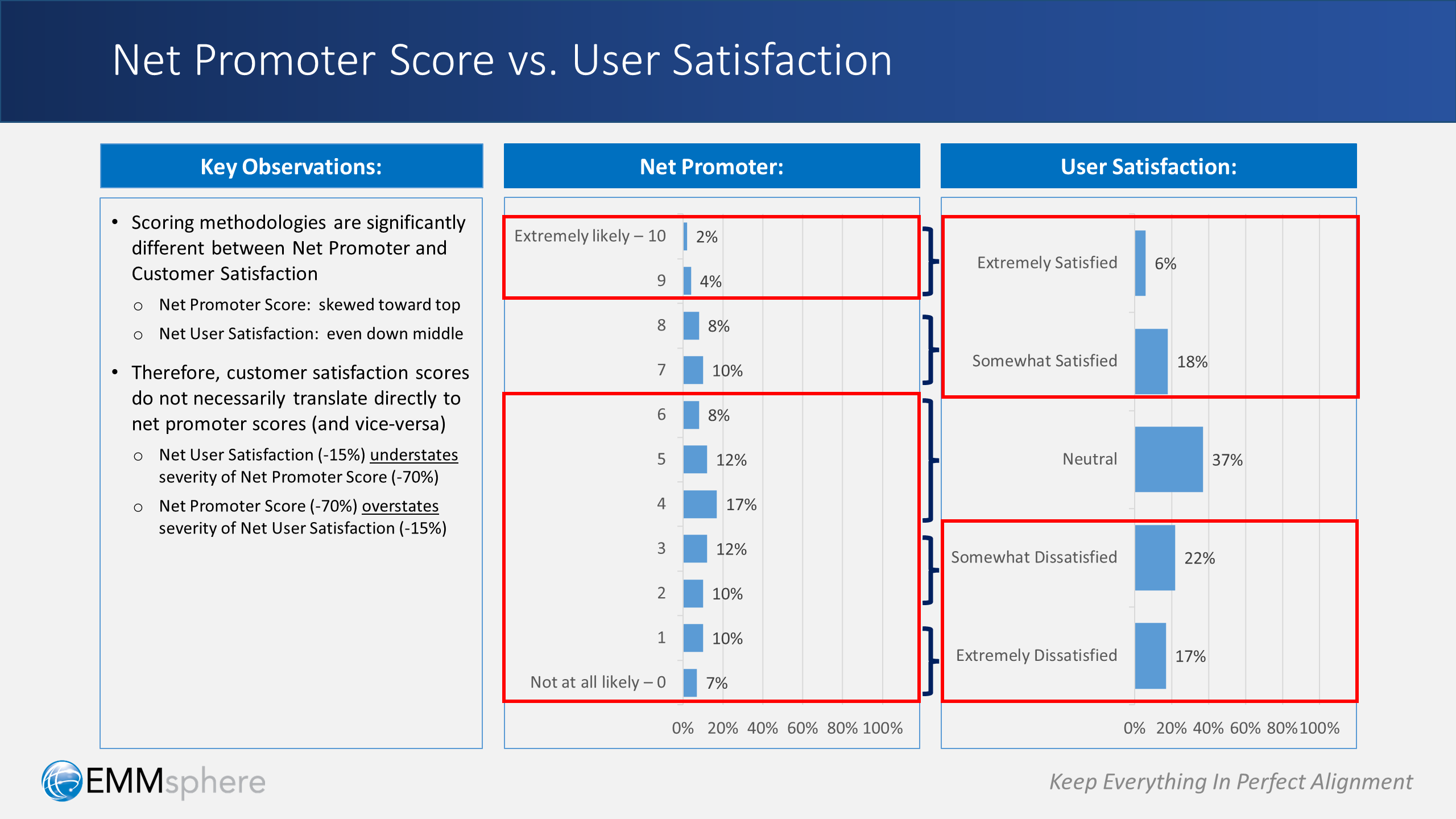 So, do we think you should use Net Promoter Score or User/Customer Satisfaction as the one and only measurement?  Well, the answer is “yes”.

We mean that literally:  use them both!  The reality is that each offers a distinct perspective, both of which are extremely valuable.

And, the reality is also that within your organization, you’ll likely have die-hard supporters of one metric and also of the other.  It’s a valid and ongoing debate, and not one that’s easily resolved.  In the end, each camp will want it’s favorite metric.

So go the extra mile:  do both metrics — deliver on the interests of both camps.  The incremental effort is minimal, and that way everyone will be satisfied.

If you use the Net Promoter Score, adhere to the letter of it’s registered methodology.  That’s what people are familiar with and that’s what they’ll expect.

Alternately, if you use User/Customer Satisfaction, do it on it’s own, with no comingling of Net Promoter Score concepts.

The reason is this:  scoring methodologies are fundamentally different between the Net Promoter Score and the User/Customer Satisfaction.  In essence:

To illustrate the point, take a look at the side-by-side comparison above and consider what happens if we mix and match:

Two Other Candidates to Consider 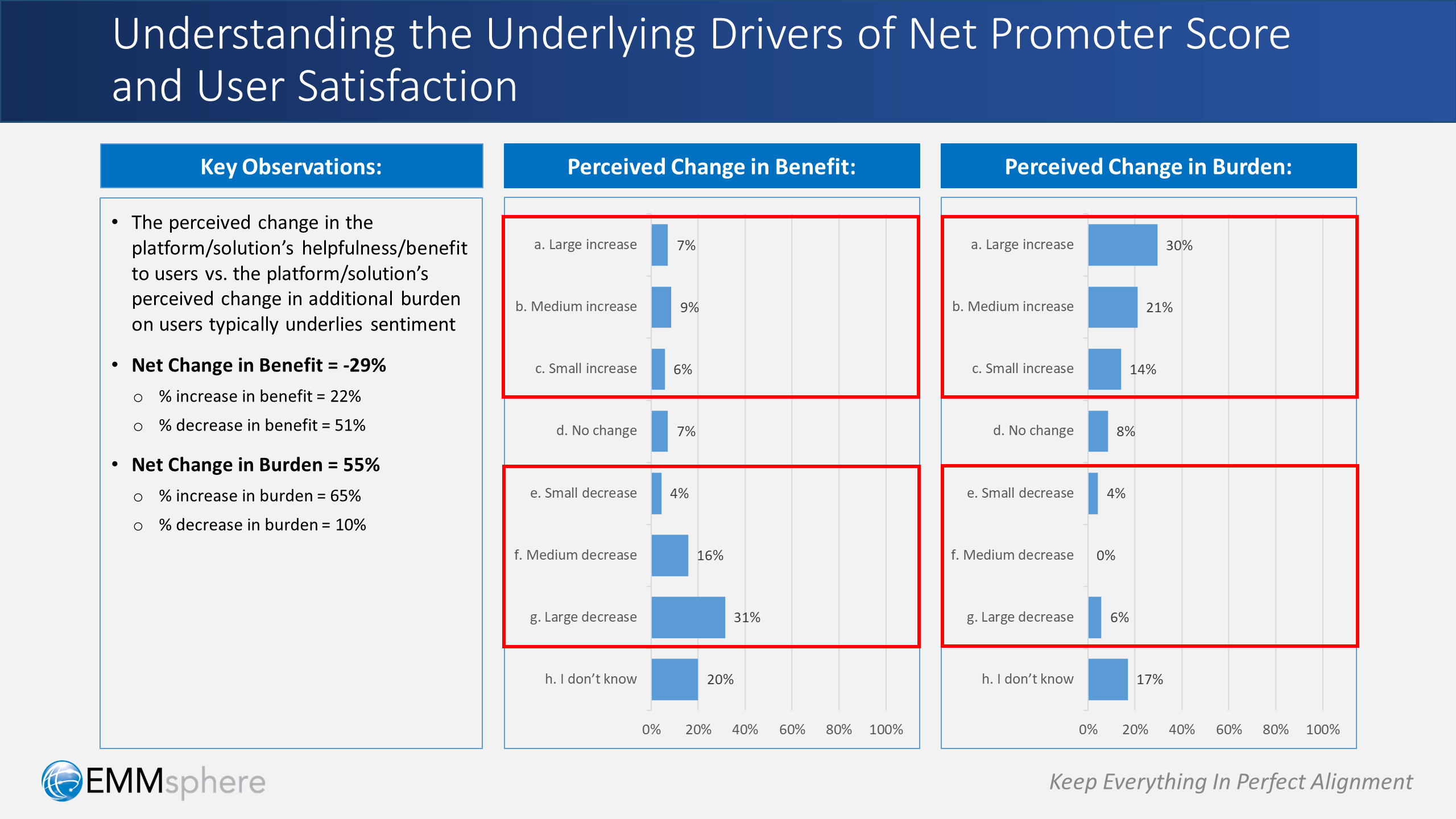 We’ve covered the two most well-known metrics around sentiment, but are there others?  Yes, and there are also various permutations of the traditional User/Customer Satisfaction we’ve discussed here.

But, there’s one key thing that all of these candidates don’t cover, which comes down to a single word:  causality.

Of course, causality is a broad topic that merits its own discussion and analysis.

However, we believe there are two simple questions that can go a long way to begin explaining why the Net Promoter Score or the User/Customer Satisfaction is at any particular value:

We call this the “benefit vs. burden” analysis, which is illustrated above.

Taken together, these questions often provide compelling insights that go to the very heart of causality — which in turn drives sentiment.  For example, in the illustration above:

When results are as lopsided as these, it should be no surprise why users aren’t happy:  it’s simply not working for them!

Netting It All Out:  “The One-Pager” instead of “The One Metric” 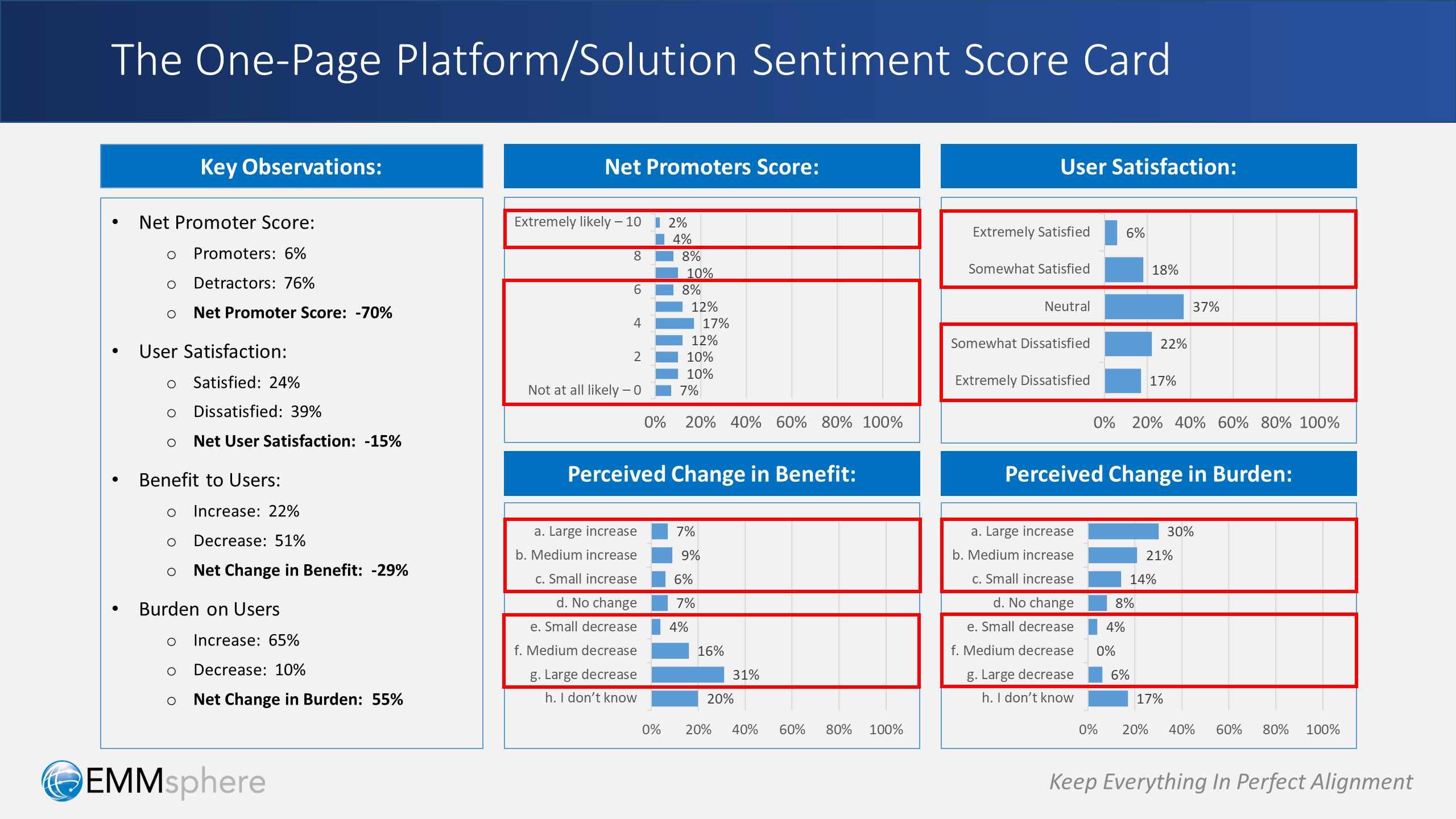 So, let’s wrap up by coming back around to the initial question:  is there one metric to rule them all?

Well, yes and no.

As we’ve discussed, there are several great candidates, and each has it’s time and place — but they’re not 100% substitutes for one another.

That’s why we rarely use only one.  Instead, we often use four — and show them on a single page!

The example above illustrates how this might look.  This one-page approach has worked remarkably well for our clients, and we hope it works for you too.

In short, our bottom-line advice is this:  focus on a handful of key metrics, and include a few steps toward causality.  Or in other words:

Capture the essence of “now” — and set the stage for “why”

Share this ArticleLike this article? Email it to a friend!
Email sent!